Risks of injury from coyotes is rare but you must still consider young and adult coyotes as dangerous.

Coyotes are wolf-like, wild dogs that roam North America and have wild instincts and are therefore predators that feed on most animals that are smaller than themselves.

When it comes to the size and appearance of a coyote they are very similar to a cross between a wolf and a fox but smaller.

Their appearance can often make them look much larger than they actually but if you trim the fur of a coyote you will find a very small body underneath the coat.

Will a Coyote Attack a Human?

Coyotes are predators and quite often you will see them coming closer to civilization in the hunt for food. 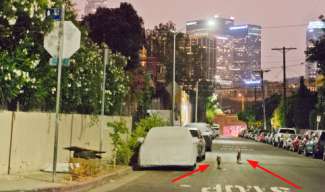 However, as they approach towns and cities they can often come into close contact with humans, however, the majority of the time coyotes will avoid humans and run away.

This is proof, as there has only ever been 1 reported death from a coyote attack in the USA and that was of a 3-year-old girl called Kelly Keen, who was playing alone until being dragged away and fatally injured by a coyote.

However, as I’ve said previously coyotes are wild animals so when they venture into towns and cities they don’t have local etiquette, they just want food and quickly.

So, unfortunately, when coyotes approach civilization, their choice of diet can often be small animals and for some coyotes, this can mean domestic pets such as small cats and dogs can be targeted.

When humans defend their pets this is when it is most likely that injuries can occur to humans.