Termite Swarms – What are nuptial flights? 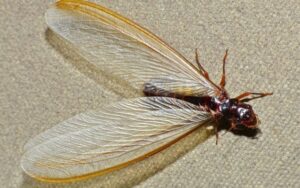 Nuptial flights is the most important phase for a colony, the start of new beginnings.

Flying termites, also known as termite swarmers, take to the skies in search of a new home once per year with the intention to create a completely new colony.

The flight begins with the termite queen releasing pheromones to allow the products of reproductives, they will then fly off from the colony until they find an ideal location.

On arrival the males will be searching for a female counterpart, once they mate they will then shed their wings and begin burrowing to create their new home for the rest of their lives.

After around 2 weeks, the first signs of life for the colony will begin to appear with nymphs beginning to emerge from their eggs.

For many home owners, seeing flying termites is usually a sign of an upcoming pest problem and this is a time you need to be diligent.

When do Termites swarm?

Swarms vary depending on the sub group of termites but generally you can expect them to be flying once the temperature begins to warm so usually begin being spotted in March – May but are known to appear as early as February in the southern parts of the United States.

You can expect the swarms to begin appearing in the days following rainfall, with the weather being overcast and very low wind speeds so the alates have the best chance of survival.

What happens during the nuptial flight?

It will begin with the swarm taking flight and then landing in a secluded area with the females landing first.

Females will then stay still in the same place whilst slowly fluttering their wings and emitting pheromones that attract the males in search of them.

Once the male has found his partner, they start doing a tandem run, where the male will follow closely behind the female.

During the run, the pair will shed their wings and continue on their journey until they find a suitable place to create their first chamber; what they consider to be a suitable location for a chamber will vary depending on the sub species of termite.

How long do termite swarms last?

Termites are usually quite quick at finding this as they are vulnerable to a large amount of predators, therefore the swarms don’t tend to last too long.

How often do termites swarm?

Termites swarm once per year, during the spring, but this also depends on the maturity of the colony.

If the colony has grown to a reasonable size and has fully established itself in its area then it will begin producing reproductives so that they can fly off to create new colonies in the local area.

The short answer to this is no. However, if you notice termite swarms in your home or the surrounding area then you need to be on high alert for infestations within the home as catching this pest early is essential to avoiding costly damage.

The main signs to look out for of an infestation within your home is shed wings around your windows or doors as these are prime entry points for termites and they will be looking to create a chamber very close to where the wings were shed.

How long do termite swarms last?

They are attracted to any source of light so this is why the home can be a prime target if they take flight later in the evening due to the lights being on, you can combat this becoming a problem by installing a bug light outside your home to kill the swarms.

How to spot a termite swarm

You’ll know if there is a termite swarm as you will see many termites with wings flying around. This is usually the only time that a home owner will know they have a termite problem by spotting these around the house.

Unfortunately, if you spot these, this can sometimes mean that there’s already a thriving colony within your home but hopefully that is not the case.

How far do swarms travel?

Short answer: not far. It’s pretty dependant on the weather at the time as they mainly rely on the wind strength for their flights.

So, the stronger the wind, the further the alates will travel before coming to a stop and finding their new place to settle.

As you probably know, there’s different sub species of termites and they take flight in slightly different circumstances but there’s two main types that swarm:

The most damaging type, so these are the ones you need to be on the lookout for mainly.

The problem with this swam is that they only fly with around 100 swarmers usually and due to their size, are pretty hard to spot.

But as these are the most common to enter the home you’ll find their wings around window sills or door frames usually. If you do, it’s time to contact your local pest control.

As they rarely infiltrate homes it’s unlikely that you will ever encounter this type of swarm. It’s essential that they find a really moist area so you can expect to see them on really humid days after heavy rainfall and are usually located in the woods.

If your home is prone to damp then you need to be on the look out for wings that have been shed in the areas with the most moisture.

Wooden garages and sheds are highly prone to this type if they haven’t been properly treated to prevent damp wood.