Home » Where do Coyotes Sleep?

Where do Coyotes Sleep? 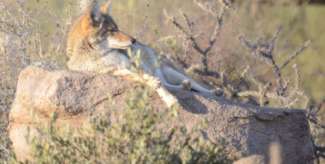 Are you seeing coyotes near your home during the day but wondered where do coyotes sleep at night?

In general, some of the places you’ll find the coyote sleeping are:

The coyote is one of the species that over the years has increased its area of occupation, adapting its habitat to changes in geography.  The reason for this could be down to the elimination of the wolf and the existence of fields of culture in places where forests used to exist.

Long ago they lived only in prairies and open deserts, at present, the place where the coyote’s sleep has expanded and it is possible to find them in forests, mountains, swamps, and cultivated areas.

Some have reached the cities, Los Angeles is one of the cities that has been colonized by them.

When do coyotes sleep?

These types of animals are nocturnal. These clever hunters go to sleep in the day and go hunting at night, which is why you usually see them out and out about at night, as well as hearing them howl then too.

Do Coyotes Live in Packs?

Although, these hunters usually live in packs, interestingly, they often move about and hunt individually and not in pairs as the wolves do.

You will quite often see a coyote take prey down by itself and as soon as it has there will be others from the pack that seemingly come from nowhere to finish or fight for the remainder of the meal.

How long do coyotes live for?

The Coyote is an animal that does not have a very high average life expectancy, they can usually live to around 6 years.

Their longevity can be increased when they live in captivity, but they are not animals that adapt easily to the care of the hand of man.

This animal acquires its sexual maturity when it is one year old.

Characteristics of the coyote

In terms of feeding, coyotes are omnivores. They hunt rabbits, fish, frogs, rodents and sometimes also deer. They can eat fruits, insects, grass, and carrion.

Because it can hunt any type of animal in some places where the coyote lives in coexistence with humans, these have become undesirable since they kill calves, sheep, chickens and other kinds of domestic animals.