The queen in her initial year of laying eggs can produce any amount varying from a few hundred to thousands per day, allowing rapid expansion of the colony.

Queens also have the ultimate control over how large the colony will grow and what types of termites are born by varying the pheromones she releases into the air.

Development of termites is known as incomplete metamorphosis, this is the term for insects that once hatched, go through many nymphal stages.

Each nymphal stage allows the insect to get progressively bigger, shedding their exoskeleton, so there is no pupal stage that allows for a big transformation in one go.

There are many different types of the insect within each colony so the life cycles can vary slightly.

Anyway, now you have some context around the termite life cycle, let’s get into each stage and what changes they go through. 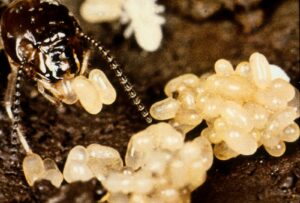 At the start of the whole cycle is the queen, she will begin laying eggs the instant she settles with her new mate.

Termite eggs are similar in appearance to caviar albeit rather smaller, they are usually light brown or pale in colour.

They are usually found in centralised areas of the colonies nest, but mainly close to the royal chambers.

It’s unlikely that you will encounter them out in the open as they are protected by the mud tubes or wooden galleries that the colony creates and are often missed by the naked eye as they are easily mistaken for just a pile of white powder.

To get an idea of how small they actually are, they are similar in size to a regular full stop like this one.

Hatching times vary depending on the climate they are situated in but generally they are expected to hatch into nymphs after around 26 days – quite similar to ants and cockroaches.

An interesting fact is that the eggs usually grow by around 30% in size when they are due to hatch.

When termites first hatch from the eggs they are known as nymphs or sometimes referred to as immature.

They are incredibly small, around 0.25cm to be exact and this makes them incredibly hard to spot, especially coupled with their pale bodies that some people even consider to be slightly translucent. 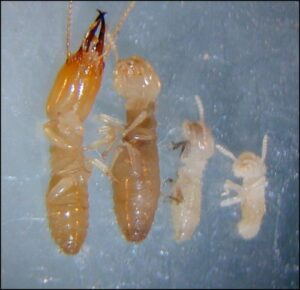 Whilst they are only slightly bigger than the eggs when they hatch, their resemblance to the workers is uncanny. It’s basically a miniature version and very interesting to see.

As the nymph ages it goes through a moulting process where it will develop a soft exoskeleton under its preexisting one and eventually this will be shed and the newly developed exoskeleton will replace it and begin to harden.

Through this process is where its future role for the colony is decided, worker, soldier or reproductive. But this isn’t always final with termites as they have a remarkable ability to regenerate into other roles dependant on the colonies needs, this is controlled by the queens pheromones.

Maturity is usually reached after around 4 moults but this again is influenced by various factors like the environment, the abundance of food available to the colony and also what type of caste the colony requires (soldier, worker, reproductive).

Termite castes is essentially just a fancy word for type of termite but the real reason this word is used is because it distinguishes different classes in the social structure that termites live under.

The segregated castes allows colonies to run efficiently, they have an incredible social structure that is highly regarded by scientists. Some people even argue that humans should be jealous of how efficient they work together.

Having this clear segregation lets the colony thrive and support each other by fulfilling their required role.

There are three different castes that they fall under: worker, soldier and reproductive.

Workers are the spine to the colony, without them there would be nothing, they ensure that all necessary tasks are done each day and keep the colony progressing.

They have a variety of jobs to do like foraging, building and one that you may not expect, feeding other termites.

Without workers, no other termites would eat.

One of their core roles involved feeding the nymphs and other members of the colony. For example, soldiers (which will we cover later), can’t even feed themselves so they depend on the workers to stay alive.

Building tunnels is another part of their position, expansion of the nest is a necessity when you consider the queen is laying up to 30,000 eggs per day.

Cellulose is the food source for them, they are able to extract this from many things such as wood (this is why they can be a hugely damaging pest within the home) and digest it.

Once digested, a process called trophallaxis is followed. This is the exchange of food between the termites, the workers will feed other members of the colony that can’t feed themselves.

A worker has a pale body and are just a bigger version of the nymphs, but with a harder exoskeleton.

You’ll usually notice the worker running around pretty quickly, almost erratic looking but they are in fact extremely organised as they stick to their set tasks and communicate through chemicals that are excreted through their sternal glands.

Workers navigate via their antennae and by following the pheromones released by the others, they are completely blind so do not have any vision to help them manoeuvre.

You can expect them to live for around 1 – 2 years.

Only around 10-15% of colonies are made up of soldiers and this is controlled by the queens pheromones that are released when their numbers are dwelling.

To become a soldier, a nymph usually moults around 3 – 5 times to help reach the huge size of the workers.

Their role in the colony is to protect it from predators but they are also known to help shift or break down obstacles that are blocking a potential new path for the colony.

Generally they are protecting the colony from ants as this is the main predator for termites but they are known to attack other colonies if they feel threatened.

Humans handling soldiers need to proceed with caution as they can inflict painful damage, nothing major but it’s still not a nice feeling to be bitten by one.

Soldiers have a large brown head so are easily identified, some also feature a nasus (nozzle on their head), this gives them the ability to spray predators with a glue/repellent to keep the predators away.

Even though they have the biggest and most powerful jaws in the colony, they can’t feed themselves and have to be fed by the worked – in return they do protect them so I guess it’s a fair trade, or racketeering, depends which way you want to look at it!

Soldiers communicate danger to the rest of the colony by tapping their head multiple times against the wall, the vibrations are felt throughout the nest so all termites are on alert and ready for the impending danger.

Reproductives are the highest in the social rankings in the termite world and provide life to the whole colony, usually there is only one pair in a colony and these give birth to all others. 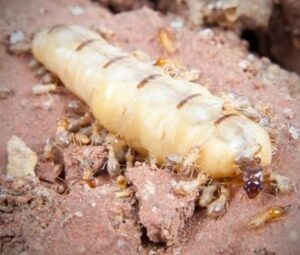 Colonies are literally built around them and they are located in the central chamber as this is the most secure from predators.

Some colonies do have more than one pair of reproductives but this only occurs when the colony is dying faster than the queen can reproduce, due to it becoming so large.

There are also secondary reproductives, this type does not become active in reproduction until they are called upon or the current mating pair die off.

Reproductives can live for an incredibly long time, queens are even known to live past 25 years if they have the perfect conditions whereas the males tend to live up to 7 years.

These are the winged members of the colony, they will soon fly off in search of a partner to create a new colony.

If you spot these near your home, chances are there is a flourishing termite nest nearby and you need to be on the lookout for signs of them inside your home.

A de-alate termite is one that has shed its wings, this is generally a sign that they have found a partner and are now in the process of creating a whole new colony.

Should you find any wings inside your home you need need to contact pest control immediately to resolve the issue.