The bobcat, a creature of the night produce the spookiest of sounds. For a real fright in the season of witches and the dead, pay attention to the nocturnal wildlife such as the Bobcat.

When around the streets or in their habitats, the bobcat sounds like the noise heard only in a Jack the Ripper film.

The noise of the bobcat can sound human like a woman screaming.

If they are getting annoying, then spray wolf urine around the edge of your yard and you’ll get rid of bobcats pretty quickly…

Like the belfry owls, the Bobcats and the pumas vocalize pretty rarely. But when they do, anyone who hears them will call the emergency number!

The bobcat squeal is so like the cry of a child or woman.

Male bobcats produce the sound whilst competing during the winter mating season.

The loud noise of a male bobcat is common in regions of North America.

Cautious near humans, bobcats are very scarce in urban areas and it’s very difficult to see them.

They are solitary wild animals and they only meet during the breeding season in spring. 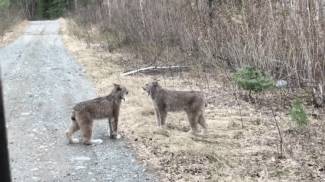 During courtship, the male emits sounds to attract the attention of the females.

They are polygamous animals (will reproduce with other bobcats), both females and males.

Females have their young in a small cave, hollow trunk or a shelter to protect their young from predators.

After 60 or 70 days of gestation, there may be between one to six pups born, usually four.

They will reach sexual maturity between the first year of life and three years.

They usually reach up to 6 or 8 years. While in captivity, they can reach up to 32 years.