Home » Where do Bobcats Sleep? (Day or Night)

Where do Bobcats Sleep? (Day or Night) 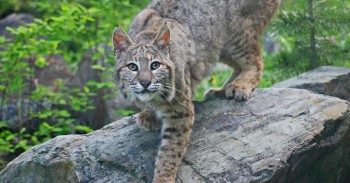 Are you curious to know about the lynx rufus species and wonder where do bobcats sleep?

Below you’ll find all the information that will answer your question.

Generally, where you will find the bobcats sleeping are:

Habitat of the Bobcats

The distribution of a bobcat is divided between the United States and southern Canada.

The males and their females come together during the breeding season, which is from December to April.

These little felines are going to eat almost anything and are born survivors (except for human interference).

Their main diet is the rabbit, but they also eat beavers, rodents, peccaries, birds, bats and deer. They are also scavengers.

Often called the red lynx, the bobcat is a medium-sized feline with a hair collar around the sides of the face.

The northern bobcats tend to be larger than their southern ones.

The color of the coat varies and has been registered in shades of light gray, yellowish brown, beige-brown, and reddish brown.

They are always seen to some extent, with some prints only on the bottom and others that have spots on the sides and on the chest as well.

The southern bobcats appear to have more patterned fur, with the spots being much smaller than that of the northern types.

Both, the melanic bobcats and the albinos have been reported, but the melanic ones have only been seen in Florida. These are oftentimes confused with their elder feline cousin the lynx, but can be easily distinguished by their tail ends.

The lynx’s tail seems to be immersed in an inkwell being completely black, while the tail of the bobcat seems to have been painted black on the upper part and white on the lower part.

The bobcat has behaviors very similar to that of the other lynx species. It lives in solitary and defends its territory against individuals of the same sex.

The males usually cover the territory of one or several females, showing a polygynous behavior. The puppies accompany the mother until approximately nine months of age, when they become independent and disperse in search of their own territory.

Reproduction and breeding of the Bobcat

They wean between 3 – 4 months of age and reach sexual maturity around 12 months for females and 24 months for males.

In their natural habitat, bobcats live 12-13 years and in conservatory homes for big cats, they have lived for more than 20 years.

What are the main threats to the Bobcat?

This small feline was the most heavily bred and commercialized member of the feline family in the last 20 years.

In the 1970s, skins of lynxes became illegal and impossible to obtain.

Today, interest in bobcat skins has declined due to international awareness of cruel methods of capture and prohibitions against the trade of animals captured with these methods until 2008 when Russia began to buy all the skins of red lynx that they could have in their hands.

This increase in demand threatens to erase the American lynx.

The Bobcats also fight against the growing human population and the destruction of all its habitat on its way.

According to 2001 statistics provided by the actual sales of hunting permits, more than 40,000 red lynxes are still killed each year.

This figure does not include all the lynxes killed by hunters who do not buy licenses or report their deaths.

Less than 3% of the human population are hunters, but they kill more than 100 million animals each year for sport.