Home » What Diseases do Raccoons Carry?

What Diseases do Raccoons Carry? 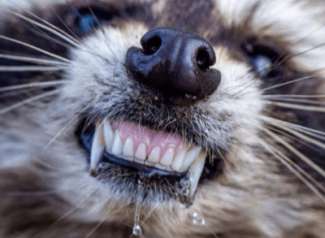 So you’re wondering whether Raccoons carry or spread diseases?

The worrying fact is that Raccoons carry a wide range of diseases and most of them can be contracted by humans or pets that we own.

These illnesses can easily be transmitted to horses, dogs, humans, poultry and many other creatures and the most dangerous of these diseases is raccoon roundworm.

Diseases include the likes of;

Raccoon roundworm or Baylisascaris procyonis doesn’t affect raccoons themselves but the worm will shed lots of eggs into the feces of a raccoon.

Can a Human get Raccoon Roundworm?

When those feces are excreted and a human comes into contact with it that’s when the real trouble starts.

Incubation of the eggs can take between 2-4 weeks inside a human and can cause a very serious disease to humans known as Visceral Larval Migrans.

Visceral Larval Migrans will damage and inflame the liver, heart and other organs where they can also cause seizures as well as a coma.

There are very few early symptoms until the illness has really taken hold but here are a few signs;

Should you believe you may have been in contact with raccoon excrement then as a precautionary note you should see a medic.

The large number of eggs that are present in the poop are very resilient and are hard to destroy as they can survive very high temperatures and extremely low temperatures.

To help prevent raccoon infestations is to remove the food and water sources wherever possible.

Roundworm eggs can live outside of a host for years.

Wild animals accounted for over 92% of rabies cases, with raccoons coming in second with over 29% just behind the bat with a little over 30% of all reported cases.

Can humans get Rabies from raccoons?

Yes, humans can become rabid but only via the broken skin.  Therefore, scratches, bites or infection via open wounds are the main culprits for developing rabies from a raccoon.

Always wash the skin thoroughly but go to see your medic immediately if any of the above has happened to you.

How to Tell if a Raccoon has Rabies?

1) Raccoons Out During the Day

It’s fairly common to expect to see raccoons at night as they are nocturnal creatures.

However, it is thought that if you see a raccoon during the day that there’s a much higher chance of it having rabies than not.

Rabies can cause disorientation for raccoons, as well as a fearless and aggressive streak that can make raccoons come out during the day but can also prompt a more likely attack if confronted by a domesticated pet and even humans.

2) Fully or Partial Paralysis of Legs

Should you see a raccoon that appears to be struggling to walk or continually keeps rolling around on the floor then there’s certainly a greater chance that the raccoon is rabid.

There doesn’t have to be a visible injury to make a raccoon struggle to walk when it is rabid.

There will be problems with their mobility and they will often fall backward and roll around.

This can often look like a human being that’s had way too much to drink.

3) A raccoon that is confused or not alert

If you come across a raccoon that seems to be a little bit dazed or not totally coherent then there’s a chance that it’s rabid.

Raccoons are normally extremely alert creatures, therefore, do not approach the coon to help it out as it could easily bite.

The raccoon should generally find its way to safety.

Raccoons are normally very purposeful and you will always find them very alert and extremely busy, normally foraging.

When they’re in a group there will be lots of chattering to each other as they’re very communicative mammals.

However, if you find one by itself making very odd noises and often then there’s a good chance it’ll have rabies.

5)  Foaming at the Mouth

This is probably the most well-known symptom when it comes to recognizing rabies in an animal.

If it’s in your home or on your property then call a wildlife expert and get well away from the creature as it 99.9% is rabid.

Raccoons carry giardiasis but so do many other animals.

Like a lot of other diseases and parasites, it is contained in the feces of raccoons and is quite often absorbed by domestic pets or even wild animals that drink the contaminated water that contains this intestinal prozea.

Check out the symptoms of giardiasis in the short video below.

This bacterial infection is contracted by consuming or coming into contact via an open wound from the urine of a raccoon.

In places where raccoons are present are very highly contagious areas due to the frequency and total disregard of where and when they urinate.

Therefore, should you exercise pets in raccoon populated areas then it’s a good decision to quickly bathe your pet or temporarily change your route.

Don’t forget that raccoons are garbage monsters and what goes in must come out.

Are you having problems with raccoons and this article has helped you, then share with friends.  You may just help them out.