Home » What is the Bobcats main predator?

What is the Bobcats main predator? 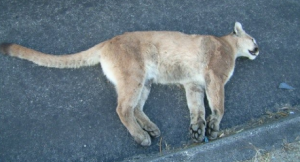 Bobcat hit by a car

Have you ever wondered what is the main predator of the Bobcat?

Well, we’ve helped hundreds of people understand what is the main enemy of the bobcat is?

So check out the list of bobcat enemies below.

Bobcats have a number of predators in the wild and in urban areas, however, they are for varying reasons.

Humans are considered a threat to Bobcats and for varying reasons.  They have been hunted by man for a long time for their fur and for food, however, human expansion has seen the habitat of the Bobcat restricted.

Bobcat pelts can vary in price from anywhere between $60 right up to $300 to 400 depending on availability and demand.

Bobcats can be eaten and they are, however, they are very rarely hunted for food by humans nowadays.

Large pets owned by humans can attack and kill bobcats but one of the main reasons for the reduction in numbers of the bobcat is by being killed by the vehicles that they drive.

In the food chain, there’s a good chance that if there is a carnivore bigger than you then you are prone to an attack.

Even if the adult predator is not bigger than an adult bobcat, it will not stop the larger carnivore from snatching the kittens of a bobcat.