Home » Muskrats: Everything You Need to Know About The Muskrat

Muskrats: Everything You Need to Know About The Muskrat 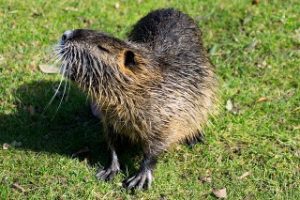 The muskrat, scientific name ondatra zibethicus, is an aquatic rodent belonging to the Cricetidae family. It is the only species of the genus Ondatra which is originally popular in North America and subsequently introduced in much of the Palearctic ecozone.

The muskrat is a medium-sized rodent which can reach a length of 60 cm, of which 25 cm is represented by the tail. For a weight that varies between 700g and 2 kg; it has a robust, but rather squat body.

Its lips close behind the incisors to encourage chewing even under water. The head is large, the eyes are relatively small and on the snout there are vibrissae. The ears are short. The legs vary from pinkish gray to dark brown. The front legs are small, the feet are relatively large, partially webbed and have bristle fringes along the edges. On the ends of the fingers, there are stiff bristles that allow the animal to swim quickly. The ankles are able to make remarkable lateral movements.

The ears have the shape of a semicircle, are half-hidden in the hair and provided with a sphincter that closes them when the muskrat is under water.

Adult muskrats generally have a body length of about one foot in length from head to rump, a tail that has a length similar to that of a foot and a body weight of about 3kg. Despite their compact forms, the muskrats have small eyes and short ears similar to those of small rodents.

The fur is brown, lighter or darker according to age and subspecies; in winter, the coat is darker and lightens with the arrival of summer. Although rare, there are completely black or albino specimens.

Not only do they leave distinctive footprints as they travel through the wet ground, but they also leave an even more marked tracing line in the sand and underground as their long tails drag along the ground.

Cranial features of the animal

The skull has an angled appearance, with a very narrow inter-orbital constriction.

The supra-orbital ridges merge together to form a sharp median crest which continues posteriorly.

The rostrum is relatively robust, the zygomatic plates have well developed upper edges.

The front palatal holes are narrow and long. The tympanic blisters are small.

The molars are provided with roots, the upper two are normal in appearance, the upper third has an anterior loop, two alternating triangles, and a rounded posterior loop.

The lower third molar has two triangles close together before the terminal loops, the second is normal while the first is provided with five close triangles, two well-defined triangles partially isolated from the front loop by deep internal and external grooves.

The fur consists of a soft and dense lower layer sprinkled with longer and more coarse hairs.

The annual molt usually begins in the summer months with the hair reaching its minimum density in August.

During the first days of autumn, the fur begins to renew itself until the appearance of the first winter coat.

The characteristic shine of its winter coat is due to the significant increase of long black and shiny hairs.

The under-fur is considered water repellent. A layer of air trapped in the fur increases the buoyancy and isolation of the animal.

The dorsal parts vary from bright reddish through various shades of brown to blackish.

The sides vary from bright reddish to dark brown, while the ventral parts vary from whitish to light brown with more or less intense reflections of reddish, reddish-brown and brownish.

Where does the muskrat live?

The muskrat lives in brackish and freshwater lakes, in ponds, streams, rivers, and marshes. It is an aquatic species which is primarily nocturnal, although it is also frequently observed during the day. It builds houses of conical shape or digs burrows along the banks of watercourses.

The ability to build various types of shelters favors its adaptation to most aquatic environments, including waterways, lakes, ponds, and marshes.

Sometimes it also frequents artificial areas such as water basins for irrigation or mining activities. Its houses are erected on a solid substrate using the dominant emerging plants of the area.

These are built above the water level with different underwater entrances. One or more nests covered with fresh plant material are found in the center of the structure.

Two types of buildings can be distinguished, the main house and a house for eating. The latter are generally smaller.

The animal builds houses during periods without ice, with peaks of activity between the end of May and the first days of June and again during the first half of October.

Inside its buildings, the temperatures are higher than the surrounding air and water.

Inside the nests, the temperature is even higher and stable and in the presence of more specimens, this increases to favor its survival during the winter months.

Other animals use the shelters of the muskrat, both small invertebrates and larger mammals such as the nutria, which uses the roofs as latrines or as places to eat.

The digging activity can cause extensive damage along with the courses of rivers and in agricultural areas.

The control and eradication programs of these animals are often started by the authorities, including the use of traps, gas, poisons, hunting, and manipulation of the levels of water.

It emits three different vocalizations: a squeak, a high-pitched sound similar to a sequence of consonant sound produced by the beating of incisors in particular when they are disturbed.

What do muskrats eat? 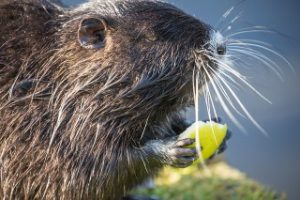 It eats the aquatic vegetation that grows near the shelters.

They also show a particular inclination to munch on aquatic vegetation.

However, in the case of very cold weather, periods of food shortage or when one of these species becomes abundant, they sometimes also consume aquatic animals and amphibians, in particular, small fish, small turtles, mollusks and frogs. Its environments vary according to the availability of the vegetable species.

Usually the roots and base of various hydrophytes constitute the main part of the diet in North America and Europe.

Because of their large populations and vast diaspora, muskrats are important food sources for many other animals.

All types of meat-loving animals, including large fish, prey birds, reptiles and wild and canine cats alike, regularly consume muskrats. Furthermore, the meat and fur of the muskrat have long been used by Native American people.

How do they reproduce?

The females have a pair of pectoral and two inguinal breasts, although individuals with 4-5 pairs have been observed. The karyotype is 2n = 54.

They give birth to 4-8 babies at a time, 2-3 times a year. The size of the litter may vary with latitude, with the northernmost populations producing a higher number of young ones.

The climatic and geographical conditions are the main factors for the beginning and the duration of the breeding season.

Most southern populations reproduce at any time of the year with peaks in winter, while in more northern latitudes, activities are limited to spring and summer.

As soon as it is born, the muskrat is blind, without hair, with a rosy or greyish color and we with a round tail. It is covered with soft fur and becomes active and able to swim within two weeks of life.

The incisors emerge from the gums after 6-7 days and the eyes open in 14-16 days. They are weaned on the fourth week.

The tail reaches its final appearance during the second month.

Most become sexually active the spring after birth, however, couplings between immature individuals have been observed and are assumed to occur in 1.5% of the population.

In nature, it lives about 3 years while in captivity it can even exceed 10 years of life.

This species is originally widespread in North America, from Alaska and northern Canada across all of the United States of America except for Texas and Peninsular Florida.

Introduced in the Czech Republic in 1905 in breeding farms for fur production, it is currently present throughout the Palaearctic Ecozone, up to Mongolia, China, the north-eastern Korean peninsula and on the Japanese island of Honshu.

It has also been introduced recently in Argentina.

In Italy, it is confined to the irrigated areas of the north-east, where recent cases of the natural expansion of the populations coming from Slovenia have been reported, which led to the creation of settlements in some areas of Friuli-Venezia Giulia.

How many species of muskrat are there?

16 subspecies have been recognized.

How threatened are the muskrats?

Man is the main cause of mortality of the muskrat. Since 1971 the breeding and its economic value have continued to increase. In some cases, some populations can also use it as a food source.

In nature, the raccoon and the American mink can capture individuals in traps or feed on carrion or injured individuals.

In Europe, predators can be the red fox, the European polecat, the European mink and the ermine. Instead, it constitutes a small part of the diet for birds of prey.

Bones and muskrat hair have been found in the nests of the white-headed sea eagle, the Virginia owl, and the ferruginous buzzard.

The most important competitors of the muskrat are the nutria, the rat of the culverts and the aquatic vole.

Given its wide diffusion, the large population and its introduction in other territories, the IUCN classifies the muskrat (O.zibethicus) as a species at minimal risk (LC).

Its economic and social values to man

The muskrat certainly possesses the most valuable fur in North America.

Muskrats’ fur has long been appreciated by fashionistas and by those who produce and sell them alike. People who trap and hunt muskrats often find them as easy-to-find animals. 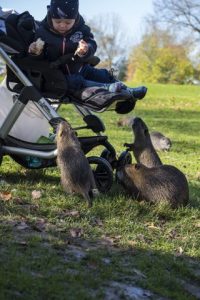 However, its economic interest was not appreciated for a long time.

In fact, in the first years of the twentieth century, a single skin was sold for only $0.05-0.10. Subsequently, with the possibility of exploiting the resources provided in particular from the Louisiana swamps in large scale, it led to a considerable increase in the market, surpassing the other fur animals in North America in total value.

However, in recent years the muskrat has lost positions in favor of the raccoon but continues to be of great importance in the leather trade. In the 1976-77 season, in 45 states of the United States of America, 7,148,370 skins were collected, with an average value of $4.75 a piece.

The species has enormous potential in reducing aquatic vegetation.

Because of its excavations, it is considered a plague for activities near rivers or bodies of water. It has a heavy negative effect of economic importance as well.

It can destroy small dams and other artificial structures in the vicinity of water, including damage to the banks, ditches, ponds, in addition to the removal of vegetation in wetlands used for wastewater treatment and the occasional loss of crops.

In wetlands and productive lakes with lush vegetation, the muskrat can be a positive factor for some aquatic birds, favoring the thinning of dense vegetation, and therefore creating new areas where to look for food.

It can also negatively affect the fish population, mollusks, and bivalves, as it can be a predator.