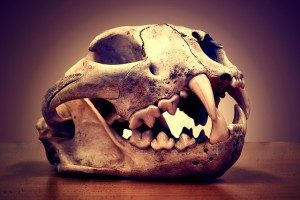 Skull of a mountain lion

You’ve ended up here as you’re wondering whether mountain lions still exist as you haven’t seen or heard anything recently.

Well, you’ll be glad to hear that the mountain lion currently is in the “least concern” category, meaning they are quite safe for now even, though their population is in decline.

Why Are Mountain Lions Endangered?

Similar to most other animals this is down to the constantly changing environment.

Mountain lions are having their habitat restricted more each day thanks to deforestation and urbanization of areas.

Other factors are contributing to their demise, there are multiple causes for their deaths such as car collisions, hunters and surprisingly one of the biggest causes is interbreeding.

Due to the lacking population numbers and reduction in natural habitat, inbred cats are becoming alarmingly common.

Are Mountain Lions Endangered in California?

The population of mountain lions in California is of the least concern and their population is actually relatively large compared to other areas across the globe, with their numbers remaining stable in the state.

How Many Mountain Lions In California?

In 1996 there was estimated to be somewhere between 4,000 and 6,000 mountain lions in California but there’s no scientific data to be able to back those numbers up.

Currently, there is an on-going research project by the California Department of Fish and Wildlife to try and get a more accurate number of the population.

How Many Mountain Lions In The USA?

There’s estimated to be approximately 30,000 cougars in the USA.

Why Did The Eastern Cougar Go Extinct?

Since the colonization of the USA began back in the 16th century the eastern cougar was always in danger. This was due to people beginning to hunt for deer, which was the main prey for the cougar.

Alongside the decline in available food for the animal, people also began trying to wipe out the cougar population to protect their land and animals.

Due to the settlers being ruthless with their hunting the eastern cougar is thought to have become extinct close to 100 years ago but it was only officially recognized like this in March 2011.