Home » What are Gopher Predators?

What are Gopher Predators? 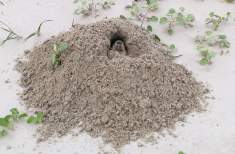 Gophers live the best part of their life underground, so you may be wondering, what are the predators of Gophers?

There are many animals that love a good feast on a gopher and these are:

How do Snakes catch Gophers?

Snakes often enter the burrow of a Gopher and chase them through their underground tunnels until they are cornered and then killed by their snake predator.

What are the Surface Predators of Gophers?

For those animals that are unable to enter the burrow of the gopher as the snake does, then they will quite often dig out the gopher by starting at one of the entrances.

Once the first entrance has been dug out then the scent of the gopher will become stronger and therefore, from then on the predator will follow their nose or snout, etc until they find it.

What are Gopher Predators from the Air?

Predators from the air will quite often strike when the gopher exits one of the passages it uses for removing dirt from their burrow and place it on the surface.

The gopher uses this dirt to help protect itself from predators entering their burrow such as the snake.  The dirt acts as a door but unfortunately for the gopher, it can occasionally be killed by an airborne predator whilst doing this.